Like anything else in our life, cultural factors play into our attitudes about trash and how we deal with it. How was it done where you grew up? Do you deal with it the same way now, or have things changed? Some who grew up in a rural area may be accustomed to burning their trash in the backyard or driving it to a drop-off center. Many who grew up in cities or suburbs are familiar with curbside collection – we haul out the trash one night and the next day it’s gone. Poof. Just like that. Or so it seems. For the most part, we don’t give it much thought. But, if that infrastructure wasn’t in place, things might be quite different. In this week’s blog, Kate Gislason, a student employee on the SSRC Recycling Outreach Team, unpacks her observations about how waste in managed select areas of India, which she learned about during her education abroad experience.

Most of the time during our trek in central-east India, everyone was responsible for their own waste, and I carried a 4-gallon Ziploc bag in my daypack for this reason.

When we returned from trekking to Pindari Glacier, we stayed three days in the high mountain village of Khati, Uttarakhand, where we used waste bins like the local community is accustomed to doing.

Each household is provided two bins for waste collection: one for dry waste and the other for wet waste. These bins are collected weekly and disposed of in a community dumping pit, as shown below. About once a week, all the trash within the dry pit is burned. The fire can last from minutes to a few hours, and some items, as apparent in the photo, just do not burn. Like the families, we used the wet and dry waste bins to collect our toilet paper waste (since it was not capable of being flushed) and other wrappers and various forms of solid waste. At the end of our stay, we were directed to bring these bins to the fire pit for them to be burned. This was the main way that the village of Khati would dispose of waste: using gasoline to start a fire and watch the waste burn away. 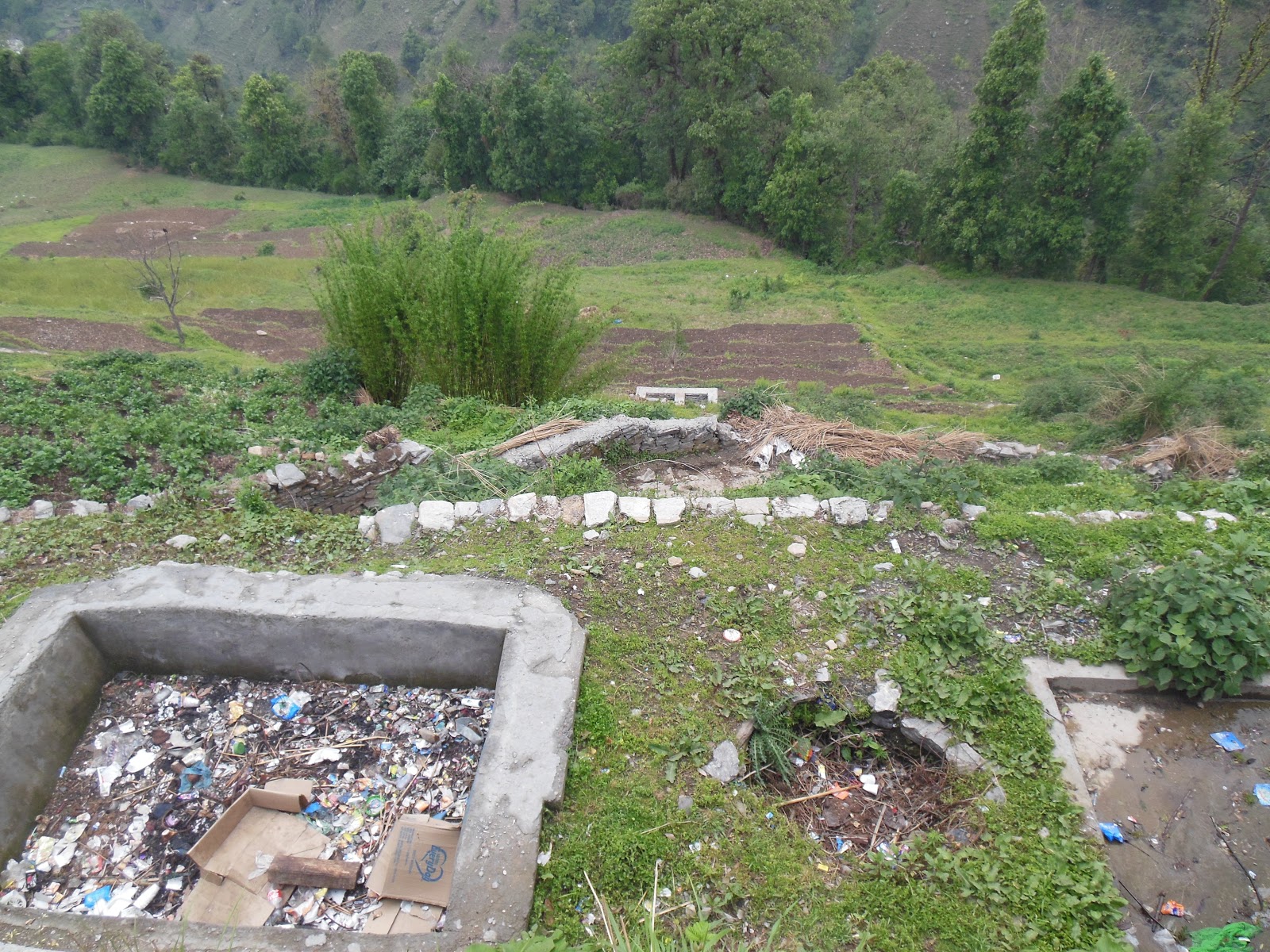 Photos by Kate Gislason except where otherwise noted. 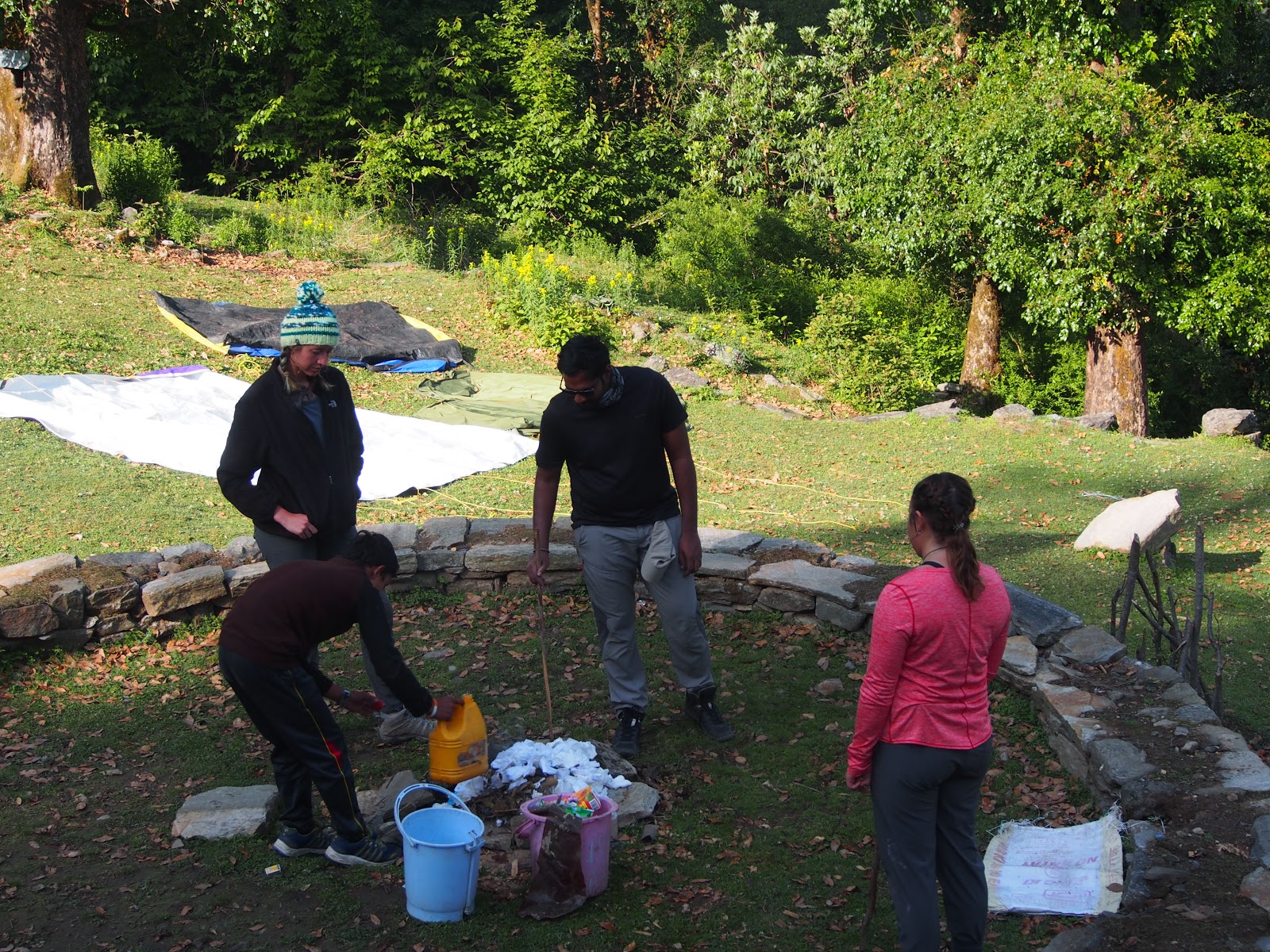 I was concerned by the fact that not all of our wrappers would burn and disintegrate, they would be left slightly burned but not gone at all. I tried to transform my concerns to questions. I thought to myself, "what happens to waste I throw 'away' in the US? Surely it is not entirely gone either."

While in Khati, our student group was able to attend a community meeting in which the locals expressed great concern with regards to how to deal with plastic waste. Even though the United States is on the other side of the globe, we expressed to them that our country is also trying to deal with our plastics properly, and consider it a concern, as well.

At most of the shops within the cities and villages we drove through, the outside would look something like those in the photo shown below. Many stores sold snacks and goodies and almost all of them were wrapped in plastic. After discussing this with some residents of Khati, I discovered that much of the motive behind selling these types of products is to stimulate their economy -- they know tourists will purchase these sweet treats, and it turns out they are right. Our group spent some of our rupees on candy and sugary drinks along our journey. We bought the entire stock of cookies from one of Khati’s few small convenience stores, along with a big bag of chocolate-filled caramels to create a cake of cookies and candy.

In the foothills of the Himalayas, tea stalls were often found along the trail. Like the small shops of the cities and villages, these tea stalls sometimes sold goodies along with hot tea in reusable cups. The photo below is a pit where wrappers and other waste is thrown and later burned. Some of these disposal techniques are a result of being stationed along a trail high in the Himalayas, and waste management differed by location but also depending on how the people running it chose to do so. 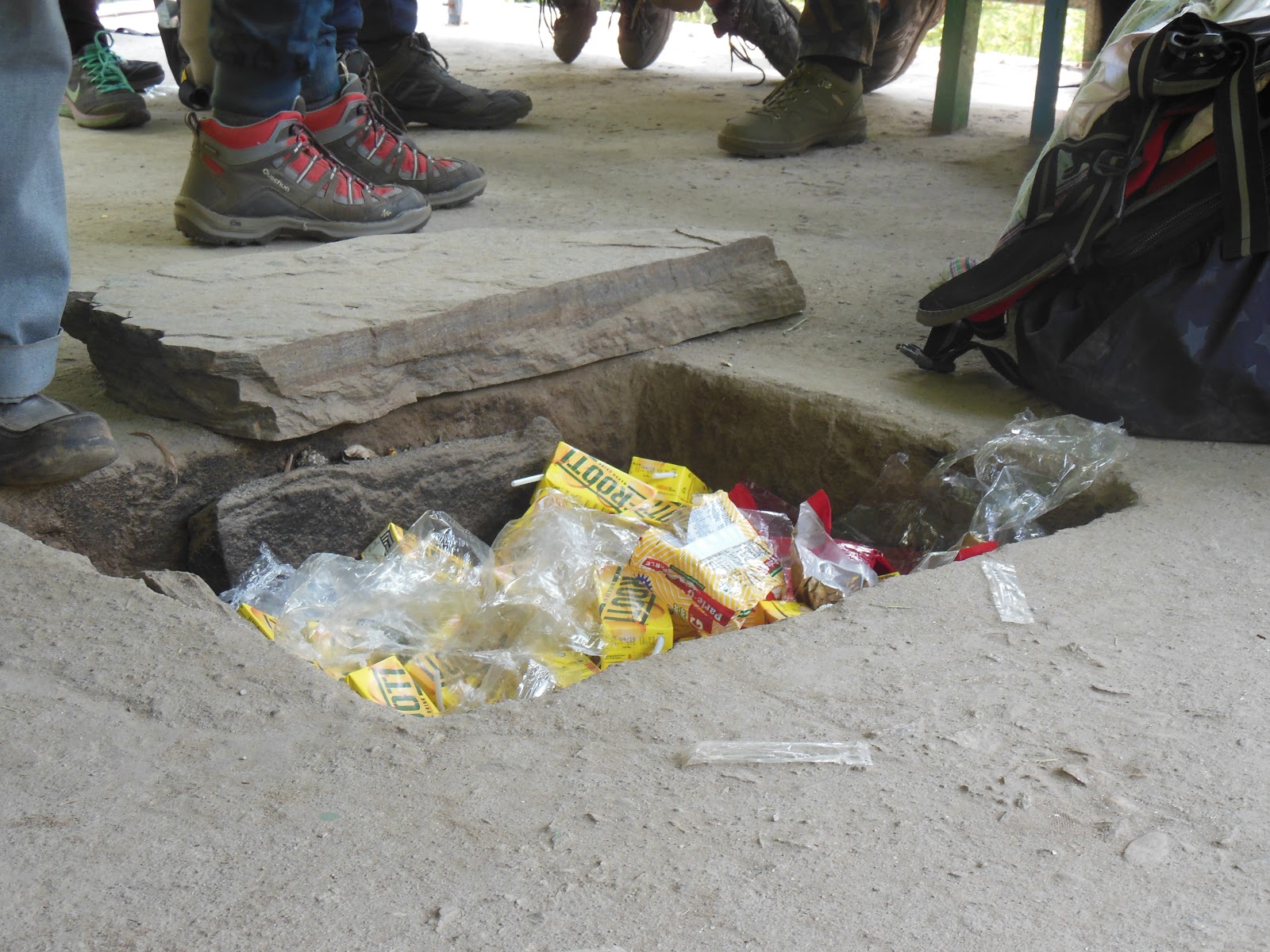 All temples we visited during the journey held wonderful treasures for the gods, gifted by individuals. Incense were lit and packs were left as gifts, along with bells, combs, makeup, and cloth pieces tied to trees. Our trekking guide, Manoj, told our group how these cloth pieces have become more popular only in the last couple of years. These offerings are a part of the religion and culture in India, but the shift from natural materials to modern petroleum-based products is influencing the environment. As the chunnis weather over time, plastic bits fall off, and become a source of pollution within towns and along the mountain trails and roadways. 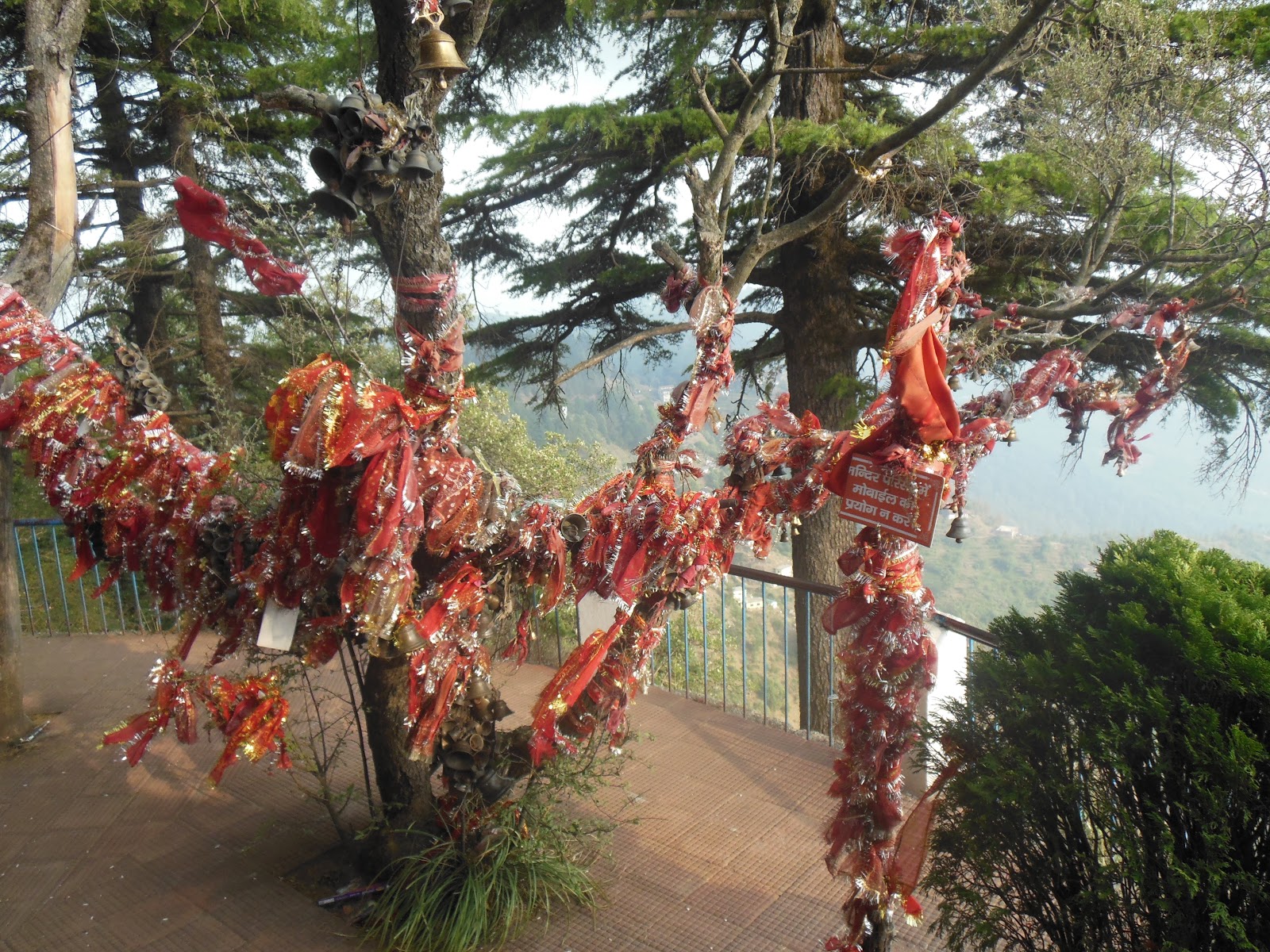 Also along the trails we trekked, we found many government-installed signs with messages referring to "dustbins." I noticed how the signs encouraged people to sustain the clean and natural condition of the Himalayas. What I found very confusing, and especially concerning, however, was the fact that there were hardly ever dustbins to throw any of our waste in along the trail. Then, I thought to myself, "If there were dustbins to collect the waste, how could they be serviced and managed properly? What would be done with that waste?" I continued to challenge myself and my assumptions. 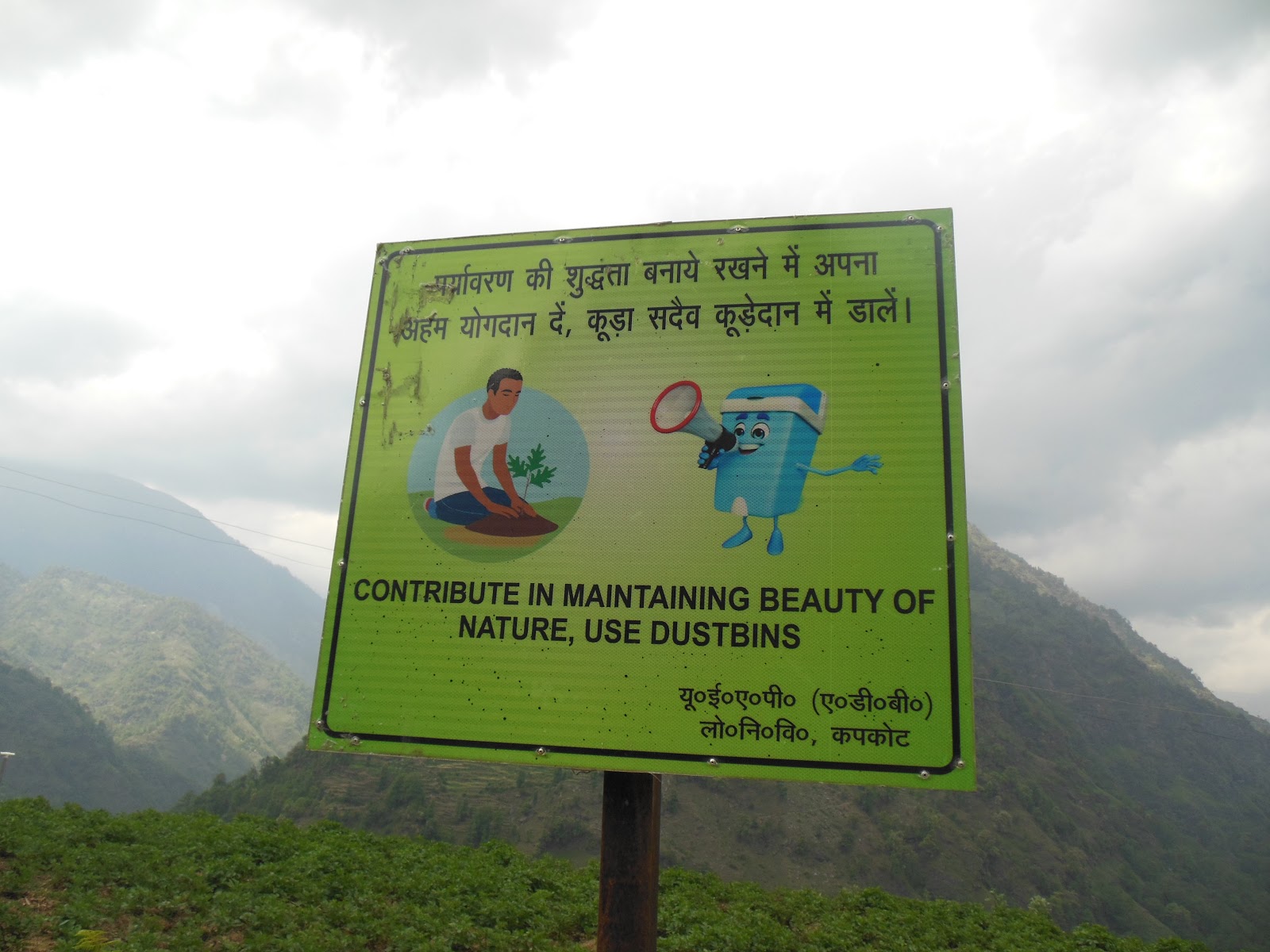 While driving on the narrow mountain roads, there was a lot to see. I found myself gazing out the windows of our jeep and not saying a word to anyone because I was absorbing all the beauty and new interesting sights, like the dumpster area pictured below. Although the dumpsters are right there, waste is scattered all around. I was taken aback to see that the waste was so close to reaching a dumpster, yet remained on the ground. But, then again, it reminded me of when I've seen litter on MSU’s campus, where there are many available garbage cans. When the dumpsters do fill up, they are set on fire, as evidenced by the discoloration and corrosion of the metal. 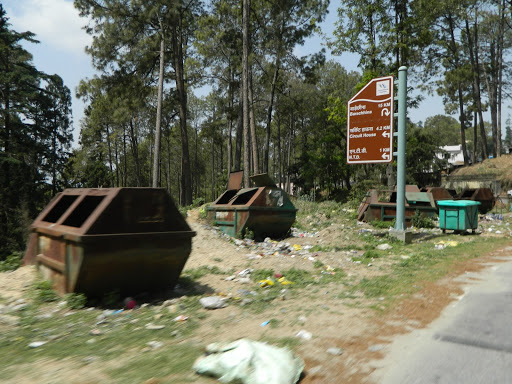 As I look back and try to pin down the most impactful experience during my journey trekking through the mountains and villages in the lap of the Himalayas, it's very challenging, to say the least. The purest memories I have involve the wonderful people I met. Connections and friendships were built on something permanent, which is our lasting memories and feelings shared together. Whether it was a fellow classmate I continue to create memories with at Michigan State, a resident of a village in the mountains of Uttarakhand, or a member of our crew from Mukteshwar, I found relationships grew quickly out of our shared experiences.

Though, I’ve found one observation to be true throughout: language barriers do not get in the way of meaningful communication.

I truly value the month I spent studying abroad, and can say with certainty that I wouldn’t trade the things I learned during my experience for anything.